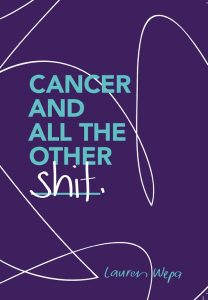 Talking about cancer is tough and will test you. However talking is one of the small things that helps us feel normal—whatever that is.”

Lauren Wepa was 20 when she was diagnosed with non-Hodgkin’s Lymphoma. Cancer and all the other shit is the book she wrote to help people who don’t have cancer keep talking to people who do.

I guess for some people it may come across like that but if you relate it back to the primary target audience (young people with cancer), that’s just how we describe a really dumb, unfortunate and not fun situation. And cancer can cause quite a bit of frustration, especially when there is a breakdown in communication between the patient and his or her family and friends. The aim of the title was not to scare people off but make them chuckle on the inside and make them want to read more. I’ve had a lot of positive feedback about that title, because that’s what cancer is, shit.

The book came from the breakdown in communication between me (the cancer patient) and my family and friends, resulting in isolation for me and losing contact with people—something that is vital for a cancer patient’s recovery and progress. Lots of people don’t know how to talk about the topic of cancer in general, let alone to a patient. It’s awkward. So awkward. But what I learnt is that you can bond better over awkwardness. I wanted other people to know that too. So I wrote and designed the book as a design student, and then Mākaro Press published it with the support of CanTeen.

Your book is focused around the metaphor of the cancer sufferer as being like a balloon, needing to be ‘filled up’ by their friends and family. Is it your experience that people aren’t very good at supporting friends and loved ones with cancer?

I don’t want to use the words ‘not very good’—cancer is unfamiliar and people just don’t know how to handle it. I guess they think they’re doing their best. From my experience people want to talk to cancer patients but they just don’t know where they stand or how to start. My book aims to educate non-patients, making cancer a more familiar topic of conversation, through encouraging patients and their families and friends to get the conversation going, and also facilitating that. The patient gives the non-patient permission to discuss the cancer, based on the simple act of sharing the book with them.

Have you had some flak from family and friends for saying this?

No way! They’ve all been really good! In fact it’s put them all at ease, been a relief. Because once they read it they knew what they could do. I guess I’m fortunate to have people in my life who understood where I was coming from, and that I only had good intentions with the book.

Yes. What I’ve learnt from talking to young people with cancer who have read the book is that they may not agree with everything in there, but they definitely agree with most of it. It’s hard to put cancer patients in boxes as everything single diagnosis and story is different. Yes, we have similarities, but we’re also different. For patients who have read the book I know it has been really helpful, and that’s who the book is for.

I had a few patients send me great feedback from reading the book. What’s also been awesome is that I recently had a parent contact me saying thank you for making her laugh and momentarily forget that it was ‘just shit’ while she watched her 11-year-old son receive his sixth round of chemo. So it’s cool to see it speaking to other audiences as well.

What’s the key message you want people to take away from reading your book?

Yes, cancer’s shit, but what’s shittier is when it stops your friends from talking to you.

How about medical professionals, have they been reading it? And what would you want them to take away from the book?

I know that my book is currently being used in Auckland and Wellington hospitals by nurses who deal with youth cancer. Some nurses have been using it regularly, for example in Wellington hospital, giving copies to their patients to read, and a bunch of CanTeen youth workers have said it’s been a really good resource for them, and they keep ordering it. The same thing in Auckland. They say the book gives them a good insight into cancer patients, particularly aged between 13-24. I have spoken to friends studying medicine who appreciate the insight the book can provide them with when having to deal with patients like this. Doctors and nurses can definitely take something away from the book about how to treat cancer patients between the ages of 13-24, especially how to facilitate communication and help the patient facilitate communication.

What I would also like medical professionals to take away from the book is that cancer doesn’t stop after you set us free into the wild –when you’ve given us the remission word. We’re human and we need support outside of the medical profession: we need human contact, human communication. It is this which can contribute to a healthy recovery.

Lauren Wepa: Lauren Wepa is a designer who lives in Auckland. Her website is at www.wepamakes.com

Mary McCallum is a novelist and poet, and publisher at Wellington’s Mākaro Press.