There is an irresistible lure to self-medication as the lines of herbal preparations, oils and supplements in supermarkets and specialty shops suggest. For companies, ‘health’ products are clearly good business. People like to feel that they are, in some way, in control of their own health. Proprietary firms have long catered to this desire which avoids an expensive and time-consuming visit to the doctor. Dunedin was home to a staple of my childhood days: the syrupy and sweet ‘Maltexo’ which my mother thought was very good for her five children; we happily downed tablespoons of it daily in the 1960s. END_OF_DOCUMENT_TOKEN_TO_BE_REPLACED

William Osler once said ‘one of the first duties of the physician is to educate the masses not to take medicine’.[1] Tragedies have unfolded when physicians and pharmacists, wooed by pharmaceutical companies as to the wonders of their products, have not heeded this advice.

END_OF_DOCUMENT_TOKEN_TO_BE_REPLACED 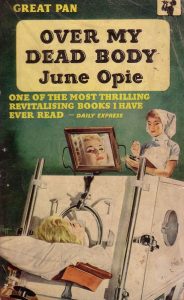 June Opie was twenty-three when she contracted polio on her way to England from New Zealand in 1947. She spent two years in a London hospital, where she initially had no friends or family. Against terrible odds, June recovered from full-body paralysis and learned to walk again, albeit on crutches and with both legs in callipers. Her autobiography, Over My Dead Body, was published in 1957. It became an international best-seller in just ten days.