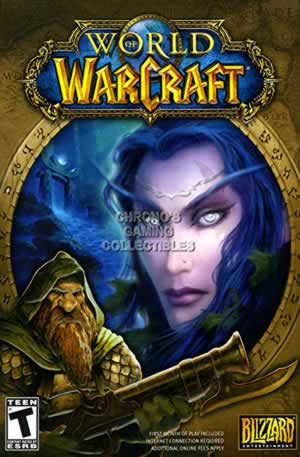 Much has been written about how the arts and humanities can contribute to our understanding of life, but little (if anything) about the positive effects of video games. Having been an avid player of World of Warcraft for ten years I would like to write about the lessons of how to live well that I have gained from spending my time in this activity (as of this moment: 224 days, 19 hours, 20 minutes, and 40 seconds on my main character or ‘main’).

World of Warcraft (WOW) was released in 2004. It has over a hundred million accounts but only a small number of these – about five million –  represent active players. Still, this means an awful lot of people around the world are playing it.

Essentially, you construct a character which is either of the Alliance or Horde faction. This is a fundamental distinction, as there is only very limited communication possible between the two factions – waving hands, farting in their general direction or similar bodily movements. Almost all player-to-player interaction occurs within your faction, and especially within your Guild. A Guild is a group of players admitted by a designated player already in the Guild. Your Guild is your WOW family, the players you chat with and get to know best on a daily basis.

Each Guild has a name (mine is ‘Honk if Your [sic] Hordey’), a Guild Master and, if big enough, Guild Officers to help run it. Each Guild has its own character and culture, generally set by the Guild Master and the Officers who have the power to ‘kick’ people from the Guild if they do not behave. Guilds vary greatly. I have been in several, and settled into ‘Honk’ about two years ago. There are so many that you’ll find one that suits no matter who you are. I have been in Guilds ranging from the risqué to those supporting LGBT rights, and everything in between. ‘Honk’ is a very solid Guild of 810 characters or ‘toons’, managed strictly by the Guild Master Killerscorpy (it’s only rarely you find out people’s real names; usually you only know them by their toons’ names). Killerscorpy doesn’t tolerate much s*** from anyone (his words), especially people who are only out to further their own needs at the expense of the Guild.

With your fellow Guildies, as well as with your realm’s community (WOW has so many players it has multiple, parallel universes or realms to make everything manageable for players), you can go on quests, explore dungeons or, for the hardest challenges, go on raids with up to 50 other players. You can also have professions, and sell, trade and barter a wide variety of goods. Or, if you prefer, you can quietly do your own solo thing; it’s up to you.

Over ten years I have accrued a number of experiences that I have found translate usefully into RL (Real Life) skills. Here are my four life lessons from World of Warcraft:

Lesson #1. You are not dead until you are dead.

This seems rather obvious but actually it isn’t. In battle, as your health points go down and the pressure to survive goes up, it’s easy to fixate on the future rather than concentrating on the present and how to get out of the mess. Rather than worry about what is going to happen, far better to keep concentrating and focused on what you are doing now. Usually, you’ll emerge intact (or at least able to heal yourself from any wounds), often with rewards from the process.

Lesson #2. Sometimes the best way to find a solution is to run through the middle of the problem.

Due to the vagaries of the game and pixellation of the characters, sometimes the best way to avoid a fight, even if you ‘enrage’ the foe, is to run like hell through the middle and then keep on running. This does require some courage and determination, as well as judgement about the success, or not, of such manoeuvres. But taking this as a metaphor for RL problem-solving, it can be useful sometimes to commit to ‘running’ with and through the centre of the problem, pursuing a course of action to its natural conclusion – even if this involves taking some damage to yourself along the way (damage from which you can subsequently heal).

Generally speaking, your toon will be best suited to one of three roles: being a ‘tank’ which involves leading the way and sustaining a lot of damage (but also having the wherewithal to take it); performing damage-per-second (‘dps’) which requires a sophisticated understanding of the abilities, strengths and weaknesses of your character and role; or being a ‘healer’ (rather self-explanatory – you heal the rest of the group). Things turn pear-shaped very quickly if someone is not playing their correct role and pretending to be something that they are not. Conversely, things can go marvellously well if everyone knows what their toon should be doing, in the given situation, preferably having done the necessary homework beforehand such as reading up on tactics for their character. For RL group dynamics, this rule can make or break the functionality of any group.

Lesson #4. Look after others and they will look after you.

No one likes ‘trolls’ (those who behave in a deliberately nasty, malicious or self-seeking way) and from guild-kicks to declined invites to raids to being reported to the authorities (yes, there are in-game moderators to whom one can appeal if the behaviour is bad enough), those with a poor reputation will become progressively isolated from the gameplay and, in extreme cases, expelled from WOW altogether. This is not to say that everyone always behaves angelically – a certain robust tolerance of swearing is, for example, a necessary prerequisite – but this is distinguished from outright bullying and other toxic behaviours.

Conversely, if you look after those in your group, particularly those with whom you play regularly, they will look after you. This may mean gifts of useful armour or weaponry, or trade goods, or simply providing welcome camaraderie and merriment whilst sharing various trials and tribulations. You can form exceedingly meaningful relationships with people even if you never get to meet them in RL or even know their name. One of my most favourite raid leaders, FishnChips suddenly stopped playing one day. A few days later a RL friend of his informed the Guild Master via logging onto WOW that he had died suddenly from a RL stroke. I genuinely mourned his passing and found it hard to find ways to express this grief. WOW members have met via the game and married in RL (I personally know two couples) and also held wakes and funerals on the game for members who die in RL, like FishnChips.

Dr Katherine Hall is a Senior Lecturer in the Department of General Practice and Rural Health, Dunedin School of Medicine, University of Otago (NZ), and a General Practitioner at Maori Hill Clinic. She plays WOW on the Nagrand realm, usually as her ‘main’ Kathreeal, who is a Level 120 Destruction-Specified, Undead Warlock and a proud member of The Horde. Please ‘/wave’ her if you ever see her.