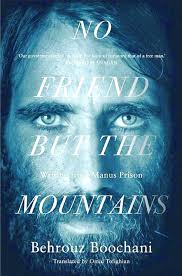 No Friend But The Mountains is an extraordinary book by a remarkable author. Behrouz Boochani has now won four major Australian literary prizes – including the 2019 Victorian Prize, worth $125,000 – for his first-hand account of his asylum-seeking journey. The Kurdish writer’s manuscript was painstakingly tapped into thousands of text messages on a cell phone from within Manus Prison, where he has been held captive since 2013. Omid Tofighian, who translated the messages from Farsi, describes the experience of working with Boochani as being ‘rich with multiple narratives’ as they consulted, collaborated and constructed the text for publication. Working oceans apart, these two academics – one a researcher at Sydney University; the other a writer, journalist and scholar held in an Australian offshore prison – developed close bonds.

Prison writing is one possible genre this book could fall into. Boochani and Tofighian have refused to call Manus a detention centre, refugee camp, or other name which might soften the harsh reality that Manus is a prison, where innocent people have been kept against their will under inhumane conditions. The descriptions of life inside Manus Prison compare with those in Nelson Mandela’s Long Walk to Freedom, or Aleksandr Solzhenitsyn’s One Day in the Life of Ivan Denisovich. All are extraordinary accounts of extraordinary experiences. They are harrowing, yet enlightening to read, helping us value our everyday freedoms and the basic human rights we take for granted.

Beyond the subject matter, however, there are few similarities with other examples of prison literature.  Boochani has written a book which is much more than a narrative of imprisonment. In No Friend But The Mountains, he employs a range of styles which straddle other genres, including biography/lived experience, journalistic, philosophical, literary non-fiction and poetry. This has been described as ‘anti-genre’, and while difficult to categorise, it is certainly a very creative work. The use of poetic verse, interspersed in the narrative text, is a powerful tool that evocatively levitates the distressing real-life story. During his description of the traumatic boat journey from Indonesia, after all on board nearly drown, Boochani writes:

Realisation of one’s mortality
Traversing through the mysterious labyrinth of death
Subsides our fears and conjures up our most beautiful moments
By embracing life
Death becomes even more terrifying and horrific
Death and life are two sides of the same coin
Death follows on from life
And death is the sweetest form of life. 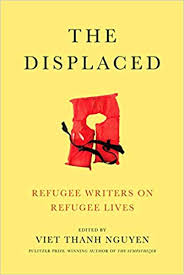 This extraordinary element of Boochani’s writing both concentrates the sadness and shock invoked by the biographical text and yet somehow also soothes us. In recalling and relating his experiences, Boochani is a calm observer, detached and isolated on his grim journey. This challenges the expected narrative of refugees bonding together in their quest to seek a life free from persecution, with long-term friendships forged by life-saving camaraderie. Boochani shows us this is not how it is. He describes life as an asylum-seeker as being part of a Kyriarchal System (a term borrowed from feminist theory, derived from the Greek word ‘kyrios’, meaning ‘lord’ or ‘master’) which turns prisoners against each other and ingrains deep hatred between people. In unsafe boats on dangerous seas, in filthy prisons run by oppressive governments, it is every man, woman or child for themselves. “For me,” writes Boochani, “isolation and silence are the greatest gifts I could ask for.”

Other refugee writers have described similar feelings of detachment and a desire for belonging. In his introduction to The Displaced: Refugee Writers on Refugee Lives, Pulitzer Prize-winning author Viet Thanh Nguyen states:

Many writers, perhaps most writers or even all writers, are people who do not feel completely at home. They are used to being people who are out of place, who are emotionally or psychically or socially displaced to one degree or another…”

He would know: Nguyen was one of the 1970s’ ‘Vietnamese Boat People’. He is now a Professor of English, Comparative Literature, American Studies and Ethnicity at the University of Southern California.

It would be fascinating to convene an international panel of refugee writers to discuss how stories of asylum-seeking are told, but the sad truth is that at this time Behrouz Boochani is unable to leave Manus Island. Unlike Mandela or Solzhenitsyn, he has not yet been set free, regimes have not yet changed. Despite Boochani’s innocence, his academic and creative talent – and his book winning Australia’s premier literary prize – that country’s government continues to treat him like a criminal, stating he will never be resettled on their shores.  As other prison writing exposed the brutality of other nations, No Friend But The Mountains sheds light on Australia’s inhumane treatment of refugees. It provides a shocking account of vulnerable people kept in unsanitary and dangerous conditions, denied their basic human rights, including medical care. Finally, this book is extraordinary for another reason: Boochani and Tofighian have not only told the story of a terrible journey, but have also given us lyrical and poetic insight in what it means to be human.

Mira Harrison is a doctor, writer and human rights activist. Read more about her work on her website is here: https://www.miraharrison.com/  She is the author of two medical books and her first work of fiction Admissions was published in December 2018.

On 23 June 2019, Dunedin Public Libraries hosted an evening with Behrouz Boochani. Listen to a podcast of an event here.

No Friend But The Mountains by Behrouz Boochani, translated by Omid Tofighian, is published by Picador, Pan Macmillan Australia (2018).

Also by Mira Harrison on Corpus, read Why Doctors Write: Admissions of a former gynaecologist.