Novelist Laurence Fearnley walks on Dunedin’s Signal Hill every day, and as she walks she creates a map of the scents she encounters. 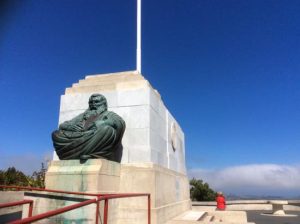 Paying attention to scent has resulted in a more intimate response to landscape, one that grows stronger with each change of season as my daily walks nurture my familiarity with the ground I cover. Every day Signal Hill grows more interesting and more beautiful.”

Back in the mid-eighties my boyfriend bought a tandem from a garage sale, a one-person tent, and two return tickets to Europe, flying in to Athens and out from Amsterdam. Though I had played no part in the planning or execution of these arrangements, I was overjoyed at the thought of travelling overseas and happily resigned from my first real job to take up the saddle at the rear end of the bike. Over several months, we biked across Greece, the length of Italy, Austria, Switzerland, south through France to Spain and then north to Brittany where news of my boyfriend’s mother’s diagnosis of stomach cancer finally reached us and we returned home.

The cycle trip introduced me to a new way of experiencing landscape, one that I had touched upon previously but never with such force. From the very first day, my response to our surroundings was dominated by the strength and variety of the scents encountered along our route.

In my journal, there are many references to smell: the exhaust fumes of Athens, the burst of eau de cologne wafting from the open windows of passing cars along the Amalfi coast, sillage and cow dung throughout the high Dolomites and Austria, laundry detergent and a particular brand of fabric softener from hanging washing in Switzerland, hay in eastern France, ‘petrichor’ — the scent of warm stone and clay after heavy rain  — in the Midi and towards the Pyrenees, resinous pine in Les Landes de Gascogne, and brine and seaweed along the coast of Brittany. Day after day, these scents surprised me, cracking the shell of my back-seat daydreams and depositing me forcibly into the slowly changing natural and human landscape. Whereas scent can transport us back to the past and reawaken memories of childhood, first love, or previous journeys, these smells had the almost opposite affect of increasing my sense of being ‘present’ in the environment.

I had that bike journey in the back of my mind when earlier this year I began scent mapping my neighbourhood. Every day I walk my dogs on Signal Hill and while I get a great deal of pleasure from standing still, listening to the birds, and taking in the view I was always aware that my constant stopping and looking about made absolutely no sense to my dogs. But equally, their nose-to-the-ground, back and forth tracking, made little impression on me. Obviously, they couldn’t see what I see, and I couldn’t smell what they smell but, unlike them, I was curious to try and develop my sense of smell, to be more like them. Surely, I could train my nose (and brain) to be more aware of my scented environment, to recognise and distinguish individual scents, and, in doing so, gain a deeper, holistic appreciation of landscape. 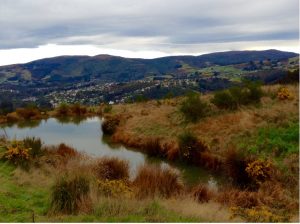 I began carrying a notebook. To begin with, the scents that made the biggest impression were those with powerful sillage and persistence — that is, the ones I could not fail to notice because they were strong and present throughout my walk: my dog after it had rolled in human faeces (an increasingly common occurrence near the monument), or burnt coffee carried up by the southerly from the Gregg’s factory below. Next were the scents that belonged to a specific location, and filled the air around me (especially noticeable after a heavy dew): the scent tunnel of leathery-nutty bracken hovering over an otherwise unremarkable stretch of bulldozer track, the tarry-asphalt from the mounds of road-chip used to resurface the Big Easy mountain-bike track. Then there were the smells that took me by surprise, that I had to sniff out, hoping to locate their source: the sweet-scented flowers of the tarata (lemonwood), the hillside patch of wallflowers near Logan Park school.

During winter, and on cold mornings, when nothing much seemed to smell, I took to picking leaves and crushing them in my fingers, holding them to my nose, or tasting them on the tip of my tongue. By the end of each walk my jacket pockets would contain a small potpourri of tattered horopito (pepper tree), tarata, mānuka and kānuka leaves and my stained fingers would smell bitter and green.[1]

Did my ability to detect and identify smells actually improve as a result of all my note taking? And did my response to landscape change as a result of actively tuning into the smell of my surroundings? It’s hard to say. My morning walk became slower and slower as I spent more time sniffing the air. My sense of anticipation as I approached the bracken scent-tunnel increased, and I felt joyful on the mornings when it released its powerful scent. 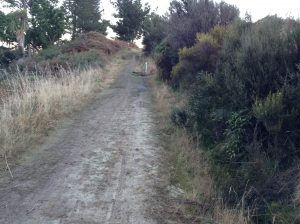 But I also spent more time looking, and what has changed the most is that I no longer focus solely on ‘big picture’ vistas (such as the view over Dunedin, Flagstaff, Saddle Hill and the south coast) but on smaller details. Paying attention to scent has resulted in a more intimate response to landscape, one that grows stronger with each change of season as my daily walks nurture my familiarity with the ground I cover. Every day Signal Hill grows more interesting and more beautiful. That is the lesson I take away.

[1] The ‘green’ refers to a fresh note identified by Michael Edwards on his fragrance wheel rather than the colour green that appears on a colour wheel.

Laurence Fearnley: Laurence Fearnley is an award-winning novelist and non-fiction writer. Her most recently published novel is The Quiet Spectacular (Auckland: Penguin Random House, 2016). She is working on a book of essays about the smell of landscape.

Leave a Reply to Here be Lavender - Corpus Cancel reply