Last week we went to church, Ebenezer Missionary Baptist Church in New Orleans, to be precise. While we were there we witnessed, and took part in, some transformative singing. The experience was something like this.

More learned people than me would find ways to explain the power of this kind of participative performance in psychological or chemical terms. They’d probably be right. But they’d also have missed the point. The point has to do with exhilaration, an elation that transported some people and will serve to sustain others through the coming week.

Was it a religious experience? Well, certainly, in some sense. As theologian Lloyd Geering has helped us understand, religion isn’t really about doctrine: it is about identity and values, and is a means to help us negotiate life crises. In this sense, yesterday’s experience of church was religious irrespective of a lack of shared doctrinal understanding among the people at worship, a black New Orleans congregation augmented by a bunch of Australasian, mostly agnostic, gospel singers on a tour with a cappella guru Tony Backhouse. 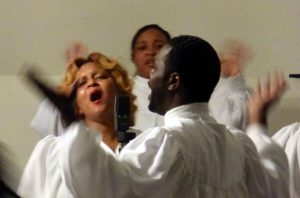 Graham Welch, Professor of Music Education at London’s Institute of Education, argues that being part of the congregation or choir is more than merely a musical experience. It’s a means of contributing to good health. He makes the case that singing develops cardiovascular fitness and improves both our mood and general alertness. Not only this, but because singing requires so many different areas of the brain to work together, Welch believes it generates “associated cognitive benefits, such as improvements in children’s reading ability, that are linked to increased auditory discrimination that supports phonological development.”[i]

Other positive side effects include oxygenating the blood, exercising the upper body’s major muscle groups, reducing stress and heightening a sense of community. Some researchers even believe singing acts like an infusion of the perfect tranquiliser – it soothes your nerves and lifts your spirit while reducing feelings of depression and loneliness.

Stacey Horn, author of Imperfect Harmony: Finding Happiness Singing With Others, writes in Time magazine that this elation may come from endorphins or oxytocin released during singing.[ii].  There has even been the suggestion, she says, that “music evolved as a tool of social living”.  The pleasure singing generates is an “evolutionary reward” for people who work cooperatively rather than “hiding alone, every cave-dweller for him or herself”. 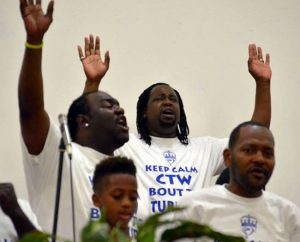 While all of this may be true, explaining the elation we enjoyed recently at church in scientific and analytical terms fails to grasp what’s at the heart of the experience. And I’m not referring to the Pentecostal dimension!

Horn believes group singing is exhilarating because “it takes something incredibly intimate, a sound that begins inside you, shares it with a roomful of people and it comes back as something even more thrilling: harmony.” And not just harmony. She could also add energy and a contact high generated by a kind of group hypnosis, the experience you enjoy at a great rock concert.

She isn’t surprised then that more and more people are joining choirs. She notes that according to Chorus America, 32.5 million adults sing in choirs. That’s one in ten Americans. If that percentage were paralleled in New Zealand it would suggest 400,000 singers here, an extraordinary number compared with the 150,000 New Zealanders playing rugby in 2010. 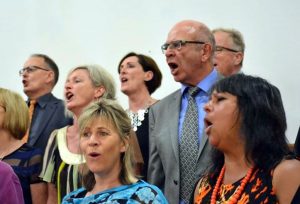 The reason we sing in such numbers is not, of course, for the medical benefits, happy side effects though they may be. We don’t sing to elevate our endorphins, or because of the rush of oxytocin release. We don’t even sing because it’s good for our mental or physical health. We sing for the experience. We sing because it’s a deeply satisfying creative act where rhythm transports us and melody, enhanced by lyric, takes us on a narrative journey. We sing because it’s a communal act, where the whole is immeasurably greater than the sum of its parts, where we are giving beyond ourselves into a pool of risk that somehow is transfigured into celebration.

And we sing because it’s an act of engagement, where our shared offering is received by listeners who can then, themselves, be transported into celebration. It’s great when it works. And it so often does.

As it did in Chicago earlier on the tour. I confess to have been quite apprehensive, feeling very exposed singing lead as our antipodean gospel choir offered the black congregation some of its own music. I shouldn’t have worried. We got a wonderfully gracious and enthusiastic reception.

And, what if we’d crashed? I suppose it’s good to know that even when the muse is missing, the act of singing is still good for your health.

Chris Nichol is a Wellington-based communications consultant, theologian, alto saxophonist and singer. Most recently he’s been a member of the Dunstan Rangers whose CDs are available in all good second hand shops.