In 2014-15, one of the most highly fêted names in biomedical circles was Elizabeth Holmes. 31 year-old Holmes had founded a company called Theranos, to manufacture a small, easy-to-use device – the Edison– that was capable of running multiple analyses on a single drop of blood. Although the Edison was not yet commercially available, the company was testing blood samples from Palo Alto patients on their in-house machines, and had signed agreements with the Cleveland Clinic, Capital BlueCross and AmeriHealth Caritas.

Holmes predicted that Thaneros technology would slash the cost of blood tests, spare patients the stress and pain of repeated blood draws and allow everyday people to monitor their own health on a daily basis, just as a diabetic checks their blood sugar levels. What investors and consumers did not know, however, was that beneath its elegant housing the Edison consisted of little more than a pipette robotic arm, only able to carry out one of the three types of tests Theranos offered, and that with very poor reproducibility. Other tests were carried out on standard equipment but on such dilute samples that their results were also unreliable, and doctors using the company’s services were frequently having to reorder tests from other providers. 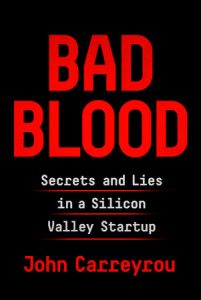 Holmes was a superlative salesperson who augmented her vision of patient empowerment with personal anecdotes about her own pathological fear of needles and an uncle whose death from cancer could have been avoided had he had access to early diagnosis. These were stories that people wanted to believe. Theranos’ combination of altruistic philosophy and money-making potential inspired mentors and excited investors. Furthermore, Holmes was a rare example of a woman making a mark in the male-dominated biotech industry at a time when people were searching for ways to promote STEAM subjects to young girls. Theranos gained additional credibility by the presence on its board of such such financial and political heavyweights as Rupert Murdoch, General Mattis, Henry Kissenger, and Charles Schultz.

Although questions about Theranos had been circulating for some time, all present and former employees were bound by rigorously enforced non-disclosure agreements that dissuaded whistleblowing. It was not until October 2015, when the Wall Street Journal published an article by journalist John Carreyrou alleging serious problems with the company’s tests, that regulators took notice.

The response, when it came, was swift and severe. Within a year Holmes had been banned from any involvement in blood testing services. She now faces both civil and criminal charges for “[using] advertisements and solicitations to encourage and induce doctors and patients to use Theranos’s blood testing laboratory services, even though [she] knew Theranos was not capable of consistently producing accurate and reliable results”. It’s a fall from grace of Icarian proportions for the woman named by Forbes in 2014 as the world’s youngest self-made female billionaire.

Many of the company’s problems were a result of Holmes (mis)management. Intensely protective of her intellectual property, she kept an extraordinarily tight rein on all aspects of the company. She closely monitored internal communications and forbade interactions between the engineering and biochemistry teams. This severely hampered their ability to identify and deal with technological challenges, such as scaling down standard technology to work on the microfluidic scale. The situation was further complicated by the fact that Holmes refused to consider using larger blood volumes under any circumstances, and immediately fired anybody who questioned her vision or approach.

Not all the blame for Theranos’ failure can be laid at Holmes’ feet, however. The methods she used to sell her company were not unusual in themselves, althought they were extreme in their extent. When Theranos burned through the first tranches of funding without a working prototype, Holmes started offering a broader range of tests, presenting deals still under negotiation as confirmed, and promising increasingly optimistic future profits in an attempt to recapitalise. Similarly, her decision to offer her company’s services to the public despite their unreliability came after arrangements with a major health provider was cancelled due to ongoing delays.

Such problems are not unusual in the biotech industry. Biotechnology entrepeneurs can easily find themselves in too deep, perhaps tempted to spin the truth to buy time to make things work. This is not to excuse Holmes’ actions, but the problems with Theranos are symptomatic of much more widespread problems in a biotechnology market where the ability to capture the imagination of investors and consumers is at least as important as a product’s feasibility – if not more so.

John Carreyrou, whose Wall Street Journal article alerted the world to the problems at Theranos, has just published Bad Blood: Secrets and Lies in a Silicon Valley Startup ,a comprehensive description of the company’s troubled inner workings and analysis of the cultural and legislative environment that enabled Holmes fraud to succeed for so long. I can thoroughly recommend it to anybody interested in understanding more about these issues. There is one thing, however, that I have yet to see fully addressed, and that is the role of Holmes’ gender in her spectacular rise and fall.

While Carreyrou discusses the way in which Holmes’ status as a female role model in the boys-own tech club was a major selling point, he has little to say about the extent to which the pressure of expectation might have contributed to her desire to succeed at any cost. But when he describes Holmes as a sociopath who knowingly put consumers at risk of real, physical harm, I can’t help looking at somebody like Elon Musk (who remains an acceptable ‘bad boy’ despite his company’s product actually killing people) and wonder whether she would have been so vilified if she were a man.

Dr Cushla McKinney is a research scientist at the University of Otago, Dunedin, New Zealand.