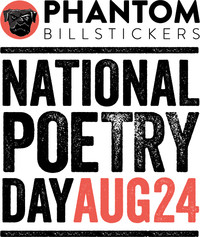 Billed as a “one day extravaganza of poetry”, New Zealand’s National Poetry Day happens annually on the fourth Friday of August. Every year it seems to get a little stronger, a little more extravagant, with poetry-related events happening in communities all over the country – and beyond. This year, for example, Edinburgh, Berlin and Spain were also involved in celebrating the art of poetry Aotearoa-style.

One way or another, thousands of people from all walks of life were exposed to a dose of the poetry bug last Friday. I hope it’s contagious. I hope it spreads.

Poetry is voice, and voice  – being both language and breath, both expression and inspiration – is intimately connected to being human. As I recently wrote in a report for the WriteNow secondary school poetry competition:

Voice is like a muscle: it can lift and move and touch. A powerful voice need not be loud (although it may sometimes need to be loud); it may be – and often is – quiet and gentle. A powerful voice comes from a listening place, which also tends to be a compassionate place. A powerful voice chooses words carefully, understanding that language represents our deepest humanity, that what we say and how we say it shapes everything we are, and creates all that we can be.”

For human beings, the flow of voice is as essential to health as the flow of blood, the flow of lymph or the flow of breath. Being silenced (as opposed to choosing to be quiet) can make a person ill. It’s always interested me that another word for ‘speechless’ is ‘inarticulate’. Before I became a writer, I was a physiotherapist. Back then, if you said ‘articulation’, I would automatically think of the human skeleton, and the articulation of its joints. Now that I work primarily with words, I’ve come to understand that our entire body is steeped in language, and that there is a powerful connection between voice and agency, and voice and movement. Where the ability to speak for oneself is limited, so too (whether metaphorically or literally) is the ability to move – to make change, to heal, to stretch to one’s full potential.

Poetry can make us much more aware that language is an embodied force. Words don’t happen only in the brain. We feel them in the rest of the body too, as anyone knows who unexpectedly reads the name of a lost love and feels the heart lurch. And sometimes there’s a sense of language being generated directly in the body’s tissues, a sense that it’s only by listening long and hard to these aches and whispers that words will sprout in the speech areas of the brain to be turned into voice. Sometimes we are inarticulate until the language emerges from somewhere in the gut, or the bones, or from deep in the corpuscles.

My poem ‘Lingua Incognita’ tries to capture something of this mysterious process.

Some words dwell in the bone, as yet
unassembled. Like the word you want

for Weary of the City, for Soul Tired; the word
you seek for Confusion Where Affection Once Existed

or the single vowel-filled syllable which would accurately render
Sensation of Freefall Generated by Receipt of Terrifying Information.

Down in the bone the word-strands glimmer and ascend
often disordered, often in dreams,

bone-knowledge beating a path through the body to the throat
labouring to enter the alphabet.

Your cells your language, occasionally articulate
in a rush of ease, the body clear as wellspring saying this is

The Moment of Illumination When One Allows that Water Yields
to Rock, and Always Flows

Sue Wootton is co-editor of Corpus. Her poems, “Lingua Incognita” and “Report” appear in her collection The Yield (Otago University Press, 2017).