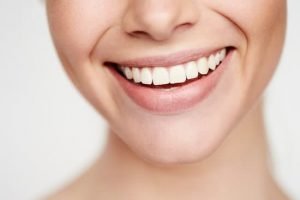 Edentulous. I came across this word recently when I was reading about teeth.  I’d never heard it before and I said it out loud, playing around with the sound of it, wondering how hard it might be to say it if I were edentulous or “lacking teeth”. My nan was edentulous. She kept her dentures in a glass on the bedside table next to the teasmade. (I don’t know which she did first in the morning, put in her teeth or have a cup of tea.)

I remember, as a five-year-old, realising that one day I would be old, and all my teeth would fall out. My face would look strange if I didn’t put my dentures in, just like nanny’s. And I would complain a lot about not being able to eat toffees.

Almost five decades later, I’m at the dentist. It’s my third appointment in three months and I’m starting treatment for my second crown. As a five-year-old, I might have been excited at the prospect of having gold in my mouth. As a fifty-something, I’ve been preoccupied with the cost. That’s why I’ve been reading books with titles like Kiss Your Dentist Goodbye.¹

“Have some sunnies.” The dental nurse hands me a pair of sunglasses before fastening a blue paper bib around my neck. I lay back in the chair and take the long ride down. 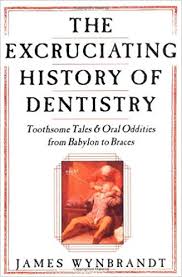 Dentists frighten people.  Although 44% of New Zealanders² say they don’t go to the dentist because of the cost, I suspect it might also be because of the fear. I grew up in the UK in the 1970s where government funding was available, but a friend of my mother’s said she’d rather go through childbirth than dental treatment. My father referred to his dentist as “the butcher” and said he’d rather pull out his teeth himself with a pair of pliers than go see him. These are not reassuring things to hear when you’re a child and you’re about to visit the dentist for the first time. I’ve been thinking about that first visit quite a bit lately.

I lie back in the chair and try to relax. I tell myself how lucky I am. If this was the fifteenth century, I wouldn’t be in a comfortable chair, I’d be lying flat on the floor, my head held in a vice-like grip between the dentist’s knees³. There might be a crowd watching me, too, since dentistry was something often performed by showmen, the audience getting their thrills from the blood curdling screams. (In those days, there was no Game of Thrones on Netflix, so people had to find other ways to get their fix of barbarity.) There will be no screams today, though, because there’s pain relief.  The huge needle is in front of my face now, about to enter my mouth.

I confess I felt some resentment when I was told why I needed these crowns.

“Your teeth are pristine,” my dentist told me, “but the amalgam fillings are causing your molars to crack.”

I remembered the guilt and the despair in my mother’s voice, all those years ago, when she explained to my dad what had happened.

“Four fillings,” she said, “and she didn’t even need them.”

I didn’t go to that first dentist for long, but there were enough appointments for him to extract four teeth and place four fillings in my molars.  My mother began to suspect that something wasn’t right and that was when she found a different dentist, Mr Dearlove. I don’t know if that was his real name or if that’s the way I remember him because he was my saviour.  It would be many years later before I ever needed treatment for a filling again.

The serious work has begun. The drill is whining like a vicious mosquito and there is the constant whooshing sound from the suction tube which the dental nurse is sticking in my mouth to stop me “from drowning”.

Water spurts from my mouth like a fountain, catching the blue light from the tiny lamp strapped to the dentist’s head. The blue droplets of water dance before my eyes. Some of them fall on my face, cold and wet; others land on my sunnies, blurring my vision.

In the UK in the 1970s, I read, dentists were paid by the government, per filling, and the bigger the filling, the more money they received¹. This led to some less than ethical behavior which seems to explain how I ended up with those fillings I didn’t need. Of course, there’s no knowing if I might have ended up with fillings later, anyway, further down the track. I decide not to dwell on the injustice. Instead, I focus on being grateful that I can afford the treatment I now need, especially when I see a story on Newshub² about a woman who’s too embarrassed to smile because of her teeth.

A few days after my last dental visit, I’m taking a walk in St Kilda.  A lady who reminds me of my nan is walking towards me with her dog, and I smile at her. She looks a little surprised and then grins right back at me. It’s a precious moment that lifts my day.

I realise that a smile is a gift and I am so lucky that it’s one I can give.

Angela Pope is a freelance medical transcriber. She recently completed a paper in Creative Nonfiction through Massey University.