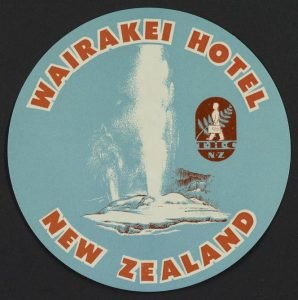 When the government used to own hospital facilities and tourist resorts it was possible to transfer patients between these sites, especially in a time of national emergency, such as the Second World War. An earthquake struck Wellington on on the 24 June 1942, followed by a second on June 26, silencing the chimes of the Wellington post office clock, bringing down chimneys, disrupting the railways and severely damaging the Porirua Mental Hospital. During the second earthquake, a child was snatched by its mother from its bed “which a moment later was crushed under a mass of brickwork”. The 1,477 patients living at the hospital were reported to have remained “surprisingly calm” during the quake but evacuations began immediately because of the extensive damage to the building. Fifty-nine female patients were sent to Sunnyside in Christchurch and 50 to Kingseat in Auckland. After the second earthquake 100 male patients were sent to Stoke in Nelson and 100 to a former Salvation Army Inebriates’ Home on ‘Roto Roa Island’ in the Hauraki Gulf, but more accommodation was urgently required.

The Minister of Health announced that “the most suitable” and “amenable” patients would be sent to Wairakei (near Rotorua) and to the Chateau Tongariro. Dr D.G. McLachlan, from the Porirua Hospital, was appointed the superintendent at the Chateau Tongariro and advertisements were placed by the Tourist and Publicity Department announcing that the Hotel would be closed to the public from 15 September 1942 “until further notice”. Women, it seemed, were suitably ‘amenable’ and 200 were to be sent to the Chateau and 100 to Wairakei. 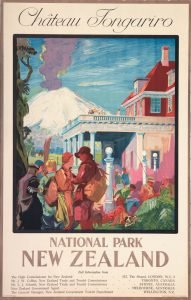 Theodore Gray, Director General of Mental Hospitals, wrote in his autobiography The Very Error of the Moon (1959), that the decision to send patients to the country’s best-known tourist hotels raised public concern about the safety of both the patients and the public. He wrote, “We made them safe by the simple expedient of taking no extra precautions whatever, by running these hotels just as they have always been conducted for the tourists … with the single exception that we removed the bedside telephones.”  Dressing-tables, mirrors, quilts, bedside reading lamps were, he recalled, “used with at least as much care” as by tourists. After their duties and occupational therapy were complete at Tongariro, “patients were free to explore the beauties of the bush and mountain scenery, within, of course, the limits prescribed for safety.” He suggested Wairakei was similarly idyllic: “one used to be awakened early by the shouts and carefree laughter of the patients as they enjoyed their morning swim in the silky water of the natural pools.” The atmosphere was “little different”, Gray wrote, “from that in any woman’s club.”

Finding staff for mental hospitals was difficult in wartime. The Dunedin Industrial Manpower Committee, for example, heard appeals by four women in early September 1942 who had been ordered to serve in mental hospitals, three of which were immediately allowed. One young nurse, however, preferred psychiatric work to being manpowered into the Inland Revenue. She recalled in an interview with Wendy Hunter Williams: “In retrospect we had a fantastic time … we skated around the rules and regulations …. In the winter we used to ski and we became very good at snooker. … Years later I went back to the Chateau and really, the patients had been far better behaved than some of those guests.” Many of the patients were elderly or, in the language of the time, ‘mental defectives’. They helped maintain the Chateau by working in the kitchen and the laundry. In the evening the “noisy” patients went off to bed around 7:30pm but the others would stay up and either dance on the “lovely parquet floor” or watch movies.

All was not idyllic however. The Public Works Department expressed concern that the Chateau had no fire escapes, in particular because many of the patients were housed in the upper storey, made entirely of wood. Fears about fire had greatly intensified after the tragic deaths by fire of 37 women patients at the Seacliff Hospital in December 1942.

The Public Works Department noted that at Wairakei there was insufficient electrical maintenance and although the whole building was wooden, there was no fire alarm. The use of hurricane lanterns at night increased the possibility of a fire.

By December 1945 it was clear that Chateau Tongariro would have to be evacuated as the eruptions of ash from the volcano had contaminated the water supply. A fire, fortunately not life-threatening, also occurred at Wairekei and that site also had to be evacuated. An army hospital at Raventhorp, south of Papakura, was brought into service for the patients. They went from the comfort of the tourist hotels into the spartan conditions of the army barracks.

In his reminiscences, Theodore Gray painted a picture of the Chateau life for patients as the ideal setting. Given that in November 1942 an “outspoken doctor” criticised conditions for psychiatric patients at Auckland hospital as “scandalous and a disgrace”, Gray was pointing out that such patients deserved better surroundings than they had previously experienced.

A government that controlled its tourist hotels could quickly turn them to the use of those suffering from mental illness. Such flexibility does not exist today but the need for good accommodation had never gone away.

Barbara Brookes is co-editor of Corpus.